Wearables are taking over, and since Google introduced the Android Wear platform, there have been new entrants into space every few months. One of the most highly anticipated wearables was the LG G Watch R which became fully available in December. Well, we got one, so now we’re going to give you a full review so you’ll be able to make up your mind if this is the wearable for you, The Haze.

For starters, I’ve been using the LG G R as my daily watch for almost two weeks to get a full feel of how it works and what you can expect with actual normal use. At the beginning of week two, Google pushed out an update for Android wear from software version 4.4w.2 to 5.0.1, which made a big difference in the experience and added a lot to the watch, making a great piece of tech even better. I’ve also had the LG G Watch R paired to a Nexus 5 running Lollipop 5.0. I have 4 e-mail accounts synced, plus Instagram and Twitter along with Google Now and Google Fit. 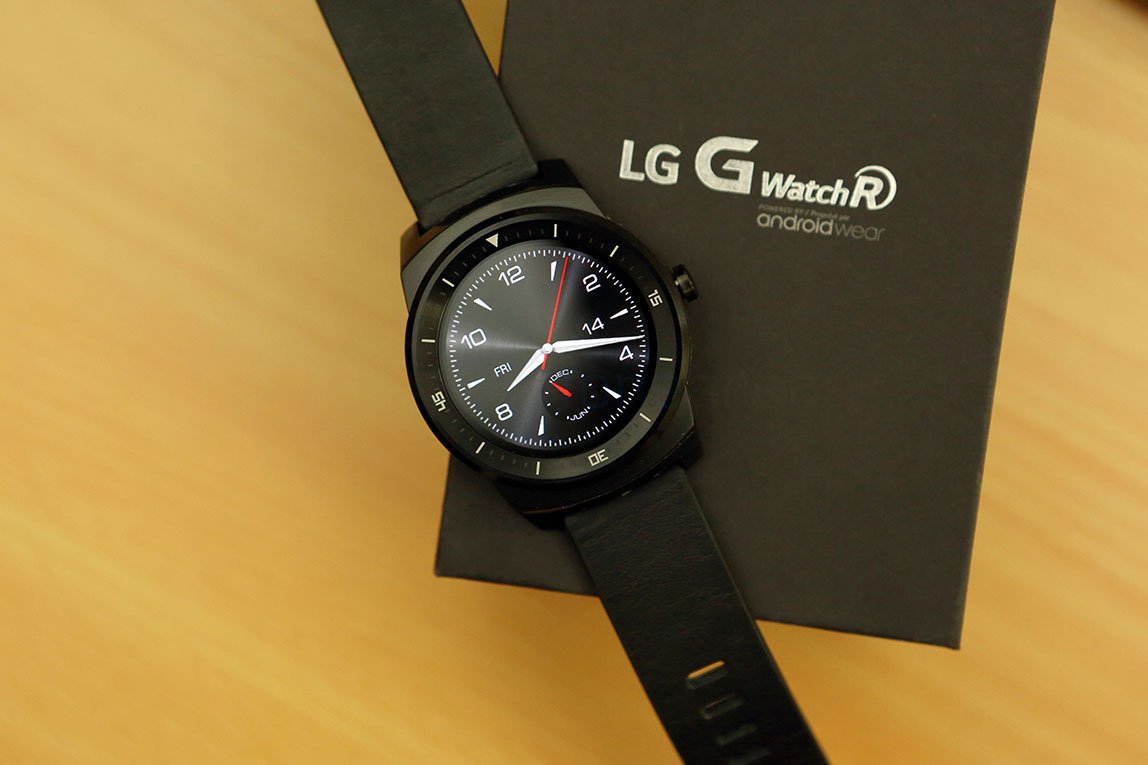 When you get the box the watch comes in, you feel like you purchased a high-end watch, not just a piece of tech gear. The box is a nice sleek black with silver accents. Once you open the box, you see the large round watch face surrounded by the (non-functional) tachometer, which gives the appearance of a high-profile watch. Inside the box is also the charging cradle and charging cables. Unfortunately, LG decided to use a proprietary 4-pin charging cradle instead of a Qi charger like the Moto 360. Luckily, the cradle connects directly to your standard micro-USB to use your regular phone charging cords.

The watch is excellent build quality and about the size and weight of any large metal face watch (that isn’t a smartwatch). The watch body is black, and the band is standard black leather. The watch clasp is metal and ties everything together nicely. The band and clasp are pretty run-of-the-mill that can and probably will be replaced by most users. Changing the watch band isn’t nearly as challenging as replacing watch bands on some Android Wear devices out there because LG kindly decided to use a standard 22mm band connection.

I haven’t worn a watch for a while, so wearing the LG G Watch R was a bit foreign at first, not because of the device but because I was actually wearing a watch again. After wearing it for two weeks and adjusting to actually having a watch on now, I feel weird not wearing it. If you haven’t worn a large face watch before, you’re going to have a little more to get used to just due to the size of the body and face of the watch. It’s not overwhelming, and it’s not too large; it just isn’t a small face or body by any means.

Initially, I was concerned about the faux tachometer around the screen, thinking it would get in the way. Honestly, it doesn’t. It actually gives you a nice feel of where your swipe should begin and end without making it feel limited. The subtle but important benefit of the bezel is that it also protects the screen; you don’t have to worry if you put your watch face down (accidentally) or wear it on the inside of your arm instead of facing outwards.

LG packed a lot into the G Watch R, and they didn’t cheap out on anything, which invests this watch ($299.99 currently) feel worth it. The screen is a 1.3″ P-OLED display (320 x 320 pixels); initially, I was concerned about how the screen would feel and respond in contrast to more traditional glass displays, but honestly, the P-OLED is great. The screen doesn’t feel cheap or “plasticky,” and you probably wouldn’t know it’s not glass if someone didn’t tell you. The display is excellent.

The colors are vibrant and bright, both in low light and direct light situations. I haven’t had any problem reading the screen, even outside in the sun. I have noticed that since the update to 5.0.1 that the screen seems brighter than it did on the previous build. The LG G Watch R is also very responsive to the touch, and I’ve only experienced a few stutters or miss triggers, but those were software specific and had nothing to do with the hardware.